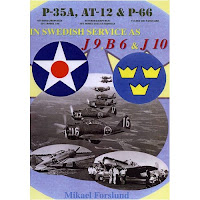 The Swedish author Mikael Forslund has written a new book and this time in English! In 1939-40, Sweden ordered 120 Seversky/Republic P-35s, 88 Seversky/Republic AT-12s and 144 Vultee Vanguards but due to an U.S. embargo on export of armament due to the ongoing war only 60 P-35s and 2 AT-12s were delivered to Sweden. The book covers the use of these aircraft in Sweden were they were put in hard use. The book has a multitude of pictures and covers the fate of all of the aircraft.
Nice effort to cover a couple of unusual aircraft in a small Air Force and highly recommended!

The book is available directly from Mikael at: http://www.mikaelforslundproduktion.com/4.html or from Amazon.
Posted by Håkan at 21:38