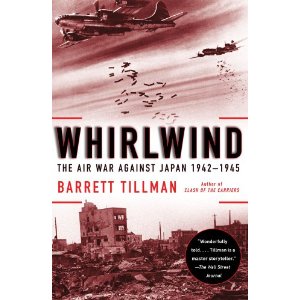 Barrett Tillman’s book about the air war against Japan has been available for a while but for some reason I haven’t bought it until now when it was available as a paperback. The book covers the bomber campaign against Japan by the U.S. (and to lesser extent the U.K.); first from China and later from the Pacific (Guam, Saipan etc). The layout of the book with a beginning describing the background, the main part covering the operations and a nice final analysis is very good and gives an excellent overview of the campaign. As in all books about the Pacific war, I’m always fascinated by the cultural differences between the Allies and Japan and especially the willingness of the Japanese to sacrifice their own people to a lost cause and the rivalry between the Army And Navy (which in fact also existed in the armed forces of the U.S.). Sometimes I gets the feeling that the Navy started the Pacific war just because they were jealous that the Army got all the “glory” in China. Of course the political causes and the need for resources played a major part but still the Japanese strategically view was a failure from the beginning. In any case, the book gives good value describing the development of the strategically campaign by the U.S. and the vain Japanese attempts to thwart it. Highly recommended!
Rating: 9/10
Available from: http://www.amazon.co.uk/Whirlwind-Air-Against-Japan-1942-1945/dp/1416584412/ref=sr_1_12?s=books&ie=UTF8&qid=1305801812&sr=1-12
Posted by Håkan at 13:01 No comments: