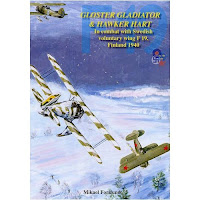 The Swedish author Mikael Forslund has written a book in English about the voluntary Swedish unit F 19, which took part in the Finnish-Soviet Winter War of 1939-40. This is a most welcome addition to the literature about the air war between Finland and Soviet Union in 1939-45 and this is the first time a Swedish author uses information from the Soviet side as well. The book is written in Mikael’s usual style with many images and individual profiles of all combat aircraft used by the unit.
Highly recommended!

The book is available directly from the author at http://www.mikaelforslundproduktion.com/4.html
Posted by Håkan at 12:43 No comments:

Number 85 in Osprey’s Aircraft of the Aces series. This one is written by Hiroshi Ichimura, which is a new name to me but a most welcome one since Japanese writers writing or translated into English are rare. The Ki-43 is a subject that interest me much since I’m writing quite a lot about the Sino-Japanese air war and the type was very prominent from the summer of 1942 until the end of the war. This period is very good covered in the typical style of the series. Included are also the IJAAF operations with the type over Malaya, Burma, New Guinea and Philippines. It’s very nice to read a book written by a Japanese about a Japanese type since there is a lot of books covering these theatres but the are mostly written by US/British writers with focus on the Allied side of operations and the ‘other side of the hill’ is not well covered in English.
Recommended!

Number 86 in Osprey’s series ‘Aircraft of the Aces’ is written by Lionel Persyn, Kari Stenman and Andrew Thomas. The latter two is among my favourite writers while Persyn is new to me. The book is written in the typical Osprey style. The book covers the operational use of the P-36 in France, Finland, the UK, South Africa, and the US. The P-36 is not well-published and since I’ve previously mostly focused on the P-36 use in Finland much of the info is new to me. If you like the books in this series, this one is a nice addition.

I bought this book written by Jon Sutherland and Diane Canwell with high expectations since the subject is one of my big interests. Unfortunately I was very disappointed when I started to read it since the authors has not used any Italian sources in the book (and it seems also like they have not used any official RAF or SAAF records either). This means that the book by all means could have been written in the 50’s or 60’s when all books took the Allied claims for fact without verifying with the other side (i.e. prior “Fighter over the Desert”). C. Shores’ 13-year-old “Dust Clouds In the Middle East” is much better and if you have this book there is no need to buy “Air War East Africa 1940-1941”. The only ones I can recommend this book to is the ones who have never read anything about this conflict and still I would recommend to go for “Dust Clouds…” first.