The latest number of this Italian magazine produced by the Gruppo Amici Velivoli Storici includes as usual a number of interesting articles. The magazine includes translations to English of the main articles. This number includes an interesting article about the Caproni Ca.114 in Peru during 1935-1944. The Ca.114 was the "loser" in the competition for a new fighter to the Regia Aeronautica that was won by the Fiat CR.32. 12 aircraft were exported to Peru and used up until 1944. Another article covers the development of the Fiat 7002 helicopter from 1957 until the project was cancelled in the early 60's. The helicopter was powered with a "jet" configuration, i.e. jet efflux from the rotor blades tips. Recommended for anyone interested in the more unknown parts of Italian aviation.

Available for subscription from: www.gavs.it
Posted by Håkan at 21:19 No comments: 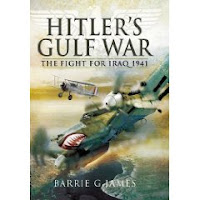 This book, written by Barrie G. James, covers the war in Iraq in 1941 when the Iraqis opportunistically revolted against the British after vague promises from the Germans and Italians on assistance. The British were in a grave situation in the spring of 1941, being hard pressed by Rommel in North Africa, having been pushed out of Greece and awaiting the invasion of Crete. At this time, the Iraqi government decided to revolt against the British, trying to push them out of the country, which would have placed the British in a very dangerous situation cutting the communications between the Middle East and India. This is a little known campaign, which have only been covered in a few books. This book doesn't add anything new regarding the air war (excellent covered in C. Shores' "Dust clouds in the Middle East" and Tony Dudgeon's "Hidden victory" and "The war that never was") while the ground war is equally good covered in Robert Lyman's "Iraq 1941". However, what it does add in an easy way is the political background and play of the situation in Iraqi before and during the campaign. This is very interesting reading given the situation that have prevailed in the country up until today and the situation in the whole Middle East. Unfortunately the book doesn't have any images nor any maps and suffers from having been dramatized by having dialogue added, which feels strange in a history book. The book ends with a good epilogue with the fate of the main participants after the campaign, a good bibliography and a usable index.
The verdict is a good book that in an easy way covers a dramatic campaign and complex situation but without adding anything new about the air war. Recommended.

Tor Idar Larsen has written a biography over Finn Thorsager (http://surfcity.kund.dalnet.se/norway_thorsagen.htm ). The book is on 209 pages and covers Thorsager's career from his youth via the Norwegian Air Force and the RAF to the end of his career in the SAS. It's a very nice book and includes some unique images. Books about the Scandinavian pilots in the RAF are very rare and this book covers this period very well. Unfortunately, the book is written in Norwegian and thus will only be accessible to a Scandinavian market. In addition, it lacks an index, which makes it difficult to use as reference in the future (many other Norwegian pilots features in the book). However, these are only minor issues and if you're a Scandinavian with interest in this period this is highly recommended book!